As someone who has put a great deal of work into applying variable media concepts to preserving artwork I am also necessarily interested in exploring the ontological basis for variable media in general. Variable media attempts to move the concept of the “work of art” away from the idea of specific prized artifacts and recognizes that, while the physical artifacts of an artwork have an (increasingly short) expiration date, the artwork itself can live on. For example, a net.art piece may only be executable for a few short years in its original form because it is dependent upon operating systems, browsers, plugins, and networks that are continuously updated and often become incompatible with older versions. A variable media analysis would suggest that the piece may be able to be brought back to life by porting the content into a new technological container, one that is updated to work in the new environment.

The value that society places on artifact as opposed to art makes this process more difficult, however. When we have been trained to believe that a painting hanging in the Louvre is orders of magnitude more valuable than the nearly identical replica poster hanging in a college dorm room it is hard to convince anybody, much less the artists who create such valuable works, that the artifact might be a fungible part of a larger system. As a result, we have museums full of art that is slowly–or, in many cases, quite rapidly–moving further and further away from the original impact the artist intended as they turn to dust. In order to save the art, we must first shift emphasis away from the artifact.

Some artists have already attempted to do this for their own reasons. The idea of the multiple–an artwork that is produced in large quantities, often mechanically–has sought to degrade the art world’s emphasis on singular artifacts for half a century. In You Are a Unique Snowflake I have created a multiple installation that critically engages the idea of a unique, singular artifact by producing 100,000 artifacts that are all simultaneously unique and identical. When executed, the code on each snowflake will generate a random number. Though each number would likely be unique, they are all created from the same identical process, and any given piece could be substituted for another. The realization that the code on each snowflake is further dependent upon the code floating above in the clouds takes the concept to another level, questioning whether the true uniqueness of the 100,000 snowflakes actually comes from one single process and one single artifact. Beyond the implications for art and artifact, though, there is another underlying question: is your uniqueness and individuality fundamentally different than the individuality of the snowflakes? 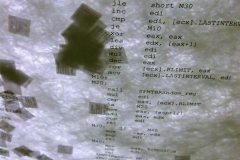 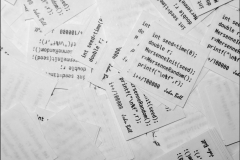 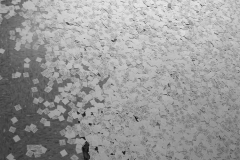 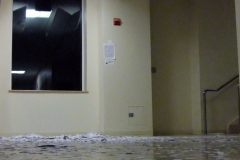