The Variable Museum is an experiment in the relationship between the creators, curators, and consumers of art. The pictures on the wall are not the artwork: they are augmented reality markers, used to position a head mounted display in space. When looking through the display a visitor sees 3D artifacts inserted into the physical museum space; these, though, are not the artwork either. Visitors are only allowed to use the displays in groups where each member of the group experiences different artifacts occupying the same physical space. While visitors cannot experience each other’s artifacts, if they describe the artifacts to each other they will find common threads among each set. The sets of artifacts that groups of visitors experience, along with the descriptions of the individual artifacts that they give each other, is the actual artwork.

The core concept of Variable Museum is that the digital presentation of works each person sees have been customized based on the results of the survey they take when entering the gallery. This customization can go beyond simple changes and may cross lines of form, subject, or medium. Each “piece”–which may be understood to be only a location within the gallery–exists as a set of possibilities until the observer enters the area around it and discovers what they have unknowingly chosen. However, all possible states of a given “piece” share something in common. What they have in common may be obvious or obscure, but both the similarities and the differences between the states are intentional calculations made by the curator/artist.

The Variable Museum project is both a re-envisioning of the museum as a collection of artifacts and an experiment in mimesis. Variable Museum uses a shared-world augmented reality system to add virtual pieces to the empty gallery space. The use of augmented reality, as opposed to fully immersive virtual reality, is critical in an environment where multiple participants are encouraged to interact with one another. A VR environment that completely removes other participants from the gallery or replaces them with a computer-generated avatar works against the goal of minimizing the computer-assisted nature of the piece.

The Variable Museum has been on display at the Lord Hall Art Gallery in Orono, Maine and the Metropolitana Gallery, Gorizia, Italy. (It appears at roughly 25:30 in this video from the Pixxelpoint festival.) It will also be featured in an upcoming special issue of the Leonardo Electronic Almanac focusing on augmented reality art. 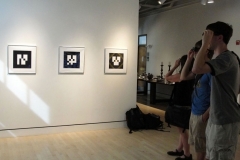 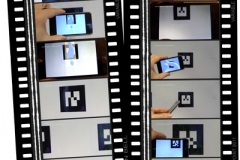 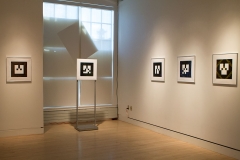 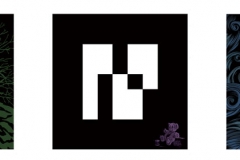 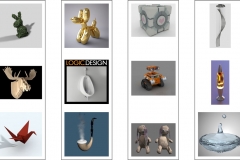