One medium that I explored for several years is the bookmarklet: a Javascript program that is saved by the user as a bookmark in their browser and can be invoked on any page. In other contexts I used this technique as a way to bootstrap Re:Poste/Re:Paik or to bring users (and their data) to Blind Alice. In Terminate, I use a bookmarklet to transform the page where it is run itself, transforming what is becoming an increasingly media-rich web into what might have been seen on a terminal running a text-only web browser like Lynx in the early 1990s.

I find that running Terminate has a few interesting implications. First, it uses Javascript to manipulate CSS–a technology developed to make web pages more visually attractive–and revert the content back to how it may have looked before the invention of not just CSS, but the graphical web itself. Second, stripping away the style information from a modern web site exposes just how far the current iteration of HTML/CSS is from the neat, clean markup language it began as. As the design of a site becomes more modern, it becomes more likely that Terminate will render its content completely incomprehensible with paragraphs out of place, hidden text exposed, or contextualizing media stripped away. Curiously, this is very similar to the way that screen reader software interprets a web page, so the text that results from running Terminate is much like what a visually impaired visitor might hear when loading a site–incomprehensibility becomes encouraged as a “feature” of many modern site designs. 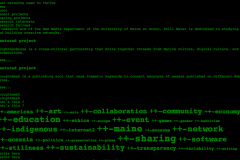 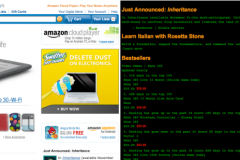 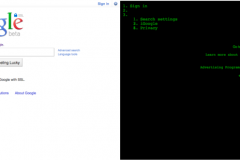 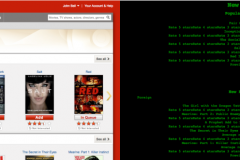