Re:Poste was created as an attempt to bring academic-level standards of criticism and intellectual integrity to mass media journalism. In many ways it is a rethinking and refocusing of the ideas behind media watchdog blogs presented as a form of direct intervention. Where most of those blogs have tried to set themselves up as ‘citizen reporters,’ though, Re:Poste’s goal is to create a center for ‘citizen fact-checkers.’ It accomplishes this by creating a trusted network of academics, experts, and professionals who review stories in the media. Those reviews are then gathered and presented in an interface that loads directly on top of the original mass media article.

Re:Poste is not simply an evolution of the blog, however. Blogs are fundamentally just another form of broadcast journalism—they are usually written by a handful of authors at most, and though most provide a small comment area, it is generally expected that any major comments or criticisms will take place on the blog of whoever is doing the commenting. The entire trackback system is based on the concept that anybody who has something significant to say about a blog story will say it in their own space and link back to the original. This system has resulted in the blogosphere remaining a million voices shouting from their individual soapboxes. One will occasionally make an impact, but collectively they only make a cacophony.

The collective power of Re:Poste’s contributors, though, is more focused. Rather than build upon the blog model of simply duplicating the structure of broadcast media and making it available to the general public, Re:Poste builds a completely different social structure. It begins with the assumption that its content will be coming from a large, distributed group. But instead of attempting to maintain a consistent tone or message through editorial control, as newspapers and blogs do, Re:Poste creates tone through its rating system.

While any individual contributor can add a comment to Re:Poste, the collective will of the contributor community is best expressed through ratings. Contributors can not only rate the original article, they also have the ability to rate the comments posted by other contributors. A single contributor can say whatever they want, but if the community rates it poorly, an end user will know that it is not a widely held view. Whereas in the past a discordant view would simply be squelched, Re:Poste allows it to be spoken but also adds the extra data that it is not seen as credible. Similarly, a highly rated post can be seen as being backed by the entire community instead of just being a reflection of an editor’s will.

This feedback system sets the parameters for the contributor community. They know that their credibility determines the magnitude of their voice in the future, and so these rules serve to restrict contributors to posting credible comments. If they do not police themselves, the community acts to make their future contributions irrelevant to the larger system. Either way, the overall quality and content of posts is maintained as a reflection of the community.

Re:Poste itself is no longer active; changes in the security model used by web browsers have closed the hole that allowed its window to load directly on top of other sites, though recent developments have opened up other opportunities that I plan to investigate. Re:Paik, a proposed project that repurposed Re:Poste’s technology for a specific commentary on Nam June Paik shortly after his death, has fallen victim to the same problem. However, Re:Poste’s model and metrics live on as the peer review feature in Thoughtmesh, a distributed publishing platform developed by Still Water at the University of Maine and USC’s Vectors Journal of Culture and Technology in a Dynamic Vernacular. 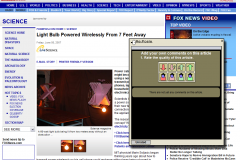 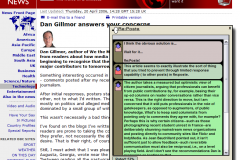 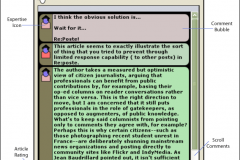