Magic looks at the increasingly varied ways in which artists–or, perhaps more generally, makers–collaborate to bring disparate pieces of a project together into some sort of coherent whole. Magic itself is also a product of these same collaborative forces. But, as often happens, the nature of the partnership is dictated as much by the personalities and backgrounds of the collaborators as by the specific technical or production needs of the project at hand.

In the case of Magic, our backgrounds suggested a very specific mode of operation that is common in the programming world where we both spend a great deal of our professional lives. Separating data from formatting is a mantra of modern program architecture both because it simplifies reuse and sustainability and because it allows increasingly specialized workers to focus on what they do best. Magic has both a data component (the video packages) and a display component (the physical installation), though the roles we chose to take on as makers were dictated by physical location more than specific skillsets.

Another incentive for working on essentially two distinct pieces that can be slotted together to create a single work is that this sort of componentized relationship between content and display is oddly absent from most of the art world’s notions of authorship. Despite a century of philosophical writings that question how much of an artwork physically exists versus how much is in the mind of the beholder, few have been willing to break the work itself into pieces that can exist independent of one another. Most analysis would argue that an artwork must be taken as a whole; the internal relationships between different aspects of a work may be considered, but only very rarely does one think about what would happen if just one of those aspects was changed. Duchamp’s In Advance of a Broken Arm, like many of his ready-mades, depended largely upon the fact that it was recontextualized into a museum setting. But was it no longer an artwork when a janitor in a Minnesota museum used it to clear a snow drift, or did it just gain a new way of being displayed and analyzed?

The secret of Magic is that it is a collection of reusable parts. The videos in Magic are a collection of video interviews that Craig Dietrich and Vanessa Vobis created as a piece of their Vectors interactive media project of the same name and they exist quite independently of this installation. The physical installation is a revision of one previously used when John Bell showed Analog(ue) in February of 2009. It is the combination of the two that makes this Without Borders installation unique from the other uses and reuses of the individual components. 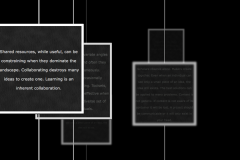 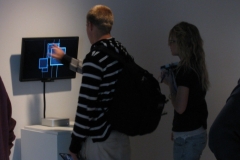 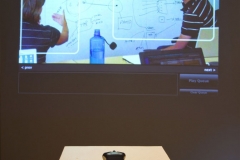