Emote8 began as an example of a challenge that programmers sometimes give themselves: write a program that does something interesting in a single line of code. In this case that line of code generated a group of lines with ends that moved randomly through an algorithmically-determined set of points, overlaying one another to create the illusion of curves where none existed. Later it expanded beyond one line to create a triangle that gave the illusion of curved surfaces, and finally to a group of eight triangles that gives the illusion of emotions. In the installation form presented here, each randomly-generated frame is a chance for a user to freeze the constantly-shifting form into a single expression of the user’s choosing and create an editioned print of that moment in time.

Instructions for Emote8
1. Kneel on the prie-dieu and gaze upward at the face before you.
2. When you find an emotion that you want to keep forever, flip up the switch cover and press the button.
3. You will receive a receipt for your emotion from beneath the cabinet. Take it.
4. Close the switch cover.
5. Take the receipt to the counter to purchase it as a print, which you will receive in the mail after the completion of the show. Your print will be a numbered and signed edition, limited to users who freeze an emotion during the See, Touch, Hear exhibition.

Limited edition prints generated at the See, Touch, Hear show in 2012 are available for purchase on request. 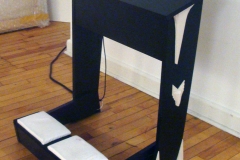 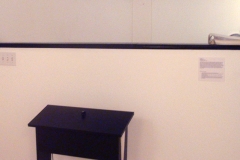 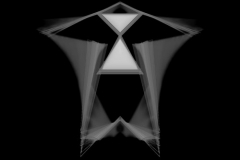 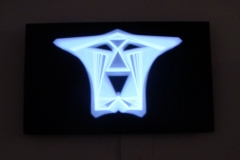