An Evening with Professor Enki is the first in a set of three Culinary Incidents that explore the relationship between consciousness and memory. It is a story of love, loss, and the collective insanity that gripped the world during the atomic era of the mid 20th century. The Incident is structured as a hybrid play and vaudville show with an overarching narrative and a series of embedded skits that reflect and comment upon the central story. It engages the audience by integrating the reason for their being there–seeing a show and having a nice dinner–into the story that unfolds throughout the night.

Whether they want to or not, the audience is forced into playing along by the environment that surrounds them. It is intentionally unsettling, a combination laboratory, alchemical lab, and old-fashioned sanitarium. They are barraged by audio and video including dual projection screens and an eight-point sound system that is mixed with the goal of creating an atmosphere that bounces from comedy to the most serious topics of the nuclear age. The people they meet are not going to make them feel better either: there is an entire group of characters who are there strictly to enhance this feeling of discomfort. Throughout the evening the audience is watched by our observers, a group of silent record keepers who take note of everything they eat, drink, and say. The confounding atmosphere continues until the very end of the evening, when the show concludes by leaving the audience in darkness with no indication that the actors and crew have left the stage until they are greeted outside the gallery. 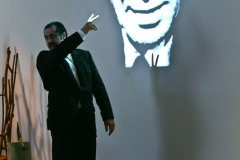 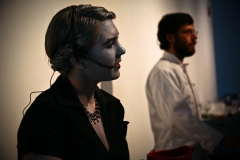 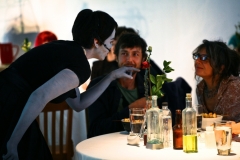 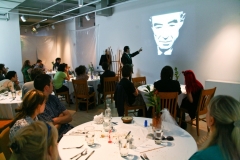 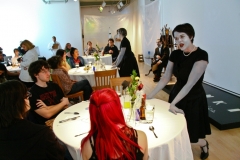